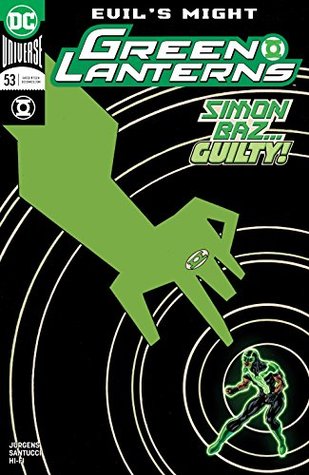 Green Lanterns is back, and therefore so is the Evil’s Might plot. I still can’t believe they were able to immediately follow up the threat of the Darkstars with something just as foreboding…but they did it. Though admittedly it probably helps that they’re targeting so many characters personally, and that we don’t really fully understand what is going on right now (as in; before this issue. The conclusion of this issue gives us a good idea of what is really happening here).

I still can’t believe the damage that Penelos has taken. I think they’re down to what, eight percent of the population? And the planet won’t be habitable for who knows how long. Basically, in short that means that once the Green Lantern Corps succeeds in getting the Ravagers to stop advancing they’re still going to have to evacuate all the civilians. And the sooner the better.

Plus there’s that whole ring corruption bit. We haven’t seen how the Guardians are faring in a while, but it’s probably safe to assume that the storm is still raging on Mogo. I have to wonder, if the Guardians can’t connect to or communicate with the Lantern, will the GL Corps be able to charge their rings? One would hope that their personal lanterns are still safe, but at this point who knows.

I’ve got to admit that the Simon plot is giving me anxiety. They’ve done a great job of showing us both sides of the situation, so we know who is being manipulated and who’s being made to look bad. But it still hurts to see. If anything, because we know the whole story, it’s even worse to watch it happen.  I know they’ll resolve it in the long run…but man is it hurting in the meantime. It’s like watching a slow motion train wreck.

As for that big revelation in the end…well, that certainly explains a thing or two, doesn’t it?