Wait a minute! Are you telling me that Hawkeye is getting another series?! Sign me up!

But seriously, Hawkeye: Freefall #1 is the start to yet another Hawkeye series, and I couldn’t be more excited about that fact. This series is already proving to be perfect for the Hawkeye fans out there, as it merges his history with the present in a most interesting way.

As this is a new series, that means there’s a new creative team involved! Say hello to Matthew Rosenberg (writer), Otto Schmidt (artist), and VC’s Joe Sabino (letterer), as they’re taking over for this fan-favorite character.

Am I laying it on a little thick? Probably. I’m just supremely excited to see one of my favorite characters get another solo series. I know it’s probably all of the talk about his Disney+ series (alongside Kate Bishop) that resulted in this, but I’m not going to complain.

Hawkeye: Freefall #1 starts off on a humorous note, and to be fair, I wouldn’t expect anything less from Clint Barton. He’s a quirky and sassy character, and that is only one of the reasons why his series are so much fun to read.

While the series does start off on a more amusing tone, it doesn’t take long to get down to business. Seeing the more serious side of Clint is always appreciated, as sometimes that is where he really shines.

Other highlights from his issue include a blast from the past; an old persona that Clint had thought he’d left in the dust is back to haunt him. Unfortunately, that makes Clint’s life a whole lot more complicated, as fingers get pointed in his direction.

In short, this was an interesting start to Hawkeye’s new series, and I am very much looking forward to seeing where Rosenberg brings us from here. 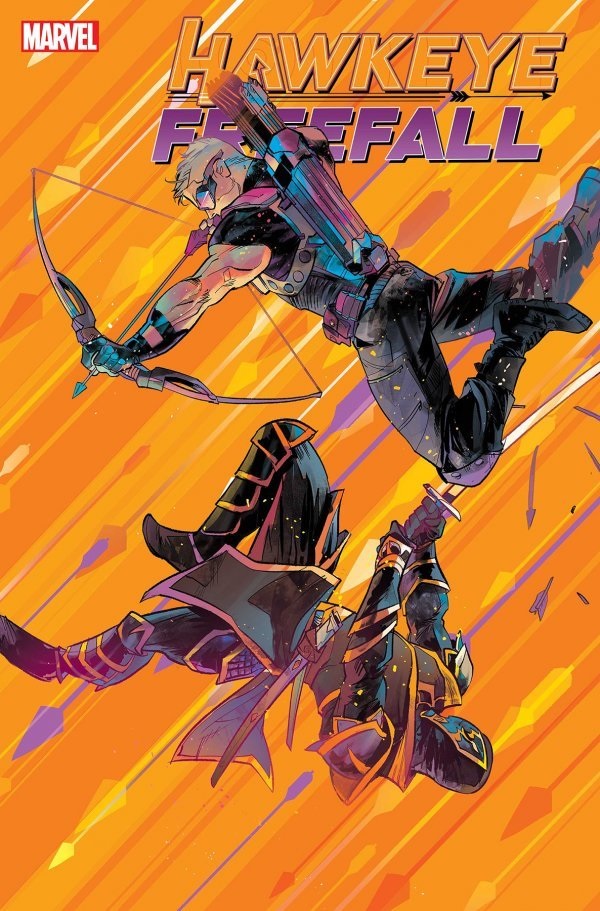 As you might be able to guess from that highly dramatic cover; the artwork in Hawkeye: Freefall #1 is brilliant and entertaining. This is not a series that is afraid of colors or dramatic poses. In fact, it seems downright full of them.

There are a few things I loved in particular about this issue. Schmidt’s sense of movement is a highlight, naturally. It enhances the fight scenes while implying the sheer amount of speed involved. Going alongside those are the colors. There’s this one shade of red that’s used in this issue that is to die for. It’s a bit of a show-stealer, but don’t worry, the rest of the issue is also full of lovely colors.

Hawkeye: Freefall #1 is an issue that completely lived up to my expectations, though if I’m being honest I’m already a bit eager to get my hands on the next issue. It had all of the charm of Clint Barton; meaning that there’s drama, fighting, and a bit of room left over for banter and humor. It’s exactly what I was hoping for.